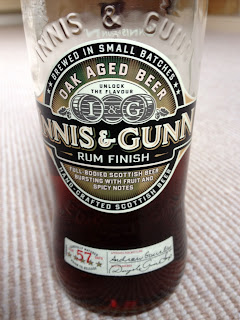 When Katherine from Innis & Gunn asked if I was interested in a sample of beers for tasting and cooking I was delighted. It was great to be asked to come up with recipes. I’m a big fan of the rich smooth flavoursome beers I’ve had from I&G before and felt that their big flavours would go very well with the produce available to me. I also wanted to investigate matching with meals too. A case duly arrived with almost the full brand range: Originial, Blonde, Rum Cask and Irish Whiskey Cask Stout. So what did I do with them?
The Original I paired with curry on two occasions and it’s rich vanilla spiced sweetness is an excellent match. Sampling it with both lightly spiced Tamatar Gosht which I made with this recipe from Sumayya @Pukkapaki and also the hotter Kerela chilli curry from my local, Ashoka South Side. A very nice change from my usual pint of Cobra or Lal Toofan.
But cooking is what I was really looking forward to. What would go well with the big flavours present in those little clear bottles. The Rum cask is a rich ale with a lot of sweetness and also spicy malt. I got beef featherblade steak from Edenmill at  Queen’s Park Famers Market. I’d heard of the cut but never tried it and was recommended to slow cook it at 120C, leave it overnight then reheat in the gravy after slicing. Slow cooking, my favourite method of flavour addition, needed no second invitation to experiement and so did exactly this. However I opted for the ale rather than a gravy stock. I wanted the flavours of the beef and the ale to come to the fore so simply browned the meat and added 1tsp of Forage wild herbs and the bottle of ale and left in the oven for 4 hours. The next day it was thinly sliced and reheated in the liquor. Serving in a bowl with the remainder of the liquid unreduced was delightful. A very rich sweet gravy with a soup consistency, floral herb note and meltingly soft meat. In fact it was so good it’s getting repeated for my upcoming Scots food and whisky night. The leftovers also made fantastic stovies the next night!

The next recipe had a Spanish influence reflecting a tip I was given that Spanish lager and mussels go well. This time I took Scottish mussels, a wonderfully healthy, tasty, cheap and sustainable seafood, with I&G Blonde, chorizo and wild garlic. Heat the chorizo and a finely diced shallot in a deep pan to release their flavour. Whack the heat up and then add 1kg mussels, a good glug of beer and cover for four minutes until the mussels open. When cooked pour over a little double cream, strew with the chopped wild garlic and divide between two bowls. A great flavour combination, especially when served with the rest of the beer.

The Irish Whiskey Cask Stout is the richest of them all and I’ve already reviewed it’s flavour here. It worked really well in a venison stew, as you might expect. However in a beer soda bread it came into its own. In fact, so much so that I think you could make a sweet loaf or even scones with it with the addition of sugar rather than salt but I’ll let you try and decide. My soda bread recipe comes straight from River Cottage Every Day by HFW so I won’t list it here but trust me that if you replace half the buttermilk with an equal quantity of the rich dark stout you’ll get a lovely deep flavoured loaf. I’d suggest if you only want it lightly ale flavoured you should use two thirds buttermilk to one third stout.

So four beers and several different flavour combinations. There are many more I’m sure. The sweetness lends itself to desserts as well as savoury meals and I know of at least one top chef who uses it for ice cream. Cooking with beer is great fun and I&G very much so.
NB this is a personal blog, the beer was supplied to me but with no expectations of positive reviews, simply to experiment which I gladly did.

This site uses Akismet to reduce spam. Learn how your comment data is processed.